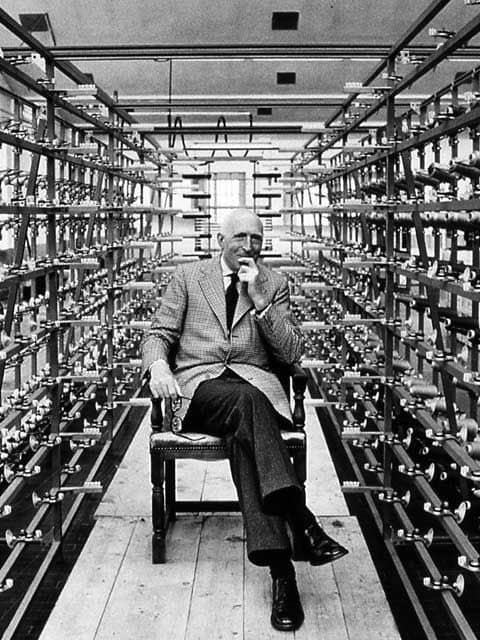 It can only be a story of passion and love for quality, the one that started from a man of quality.

And to better understand this story you can’t separate it from the man’s life and the life of those who succeeded him.

At the time, the situation in Italy was very different.

There was a shortage of goods and all those who knew how to produce something could place it on the market and be certain of the sale.

These were not the times to make long-term plans.

Carlo Barbera was 38 years old, he had built a great reputation as a textile designer while working at the Rivetti mill as Oreste Rivetti’s disciple.

And although a man of his ability was always sought out by the best companies, it was a financier who offered him a rare opportunity.

This financier, Rodolfo Caraccio, had a company, a wool mill, built-in Pianezze Biellese, a green valley at the confluence of two streams of pure and extremely low PH water.

The “Lanificio di Pianezze”, as it was called, had not been profitable for years.

Caraccio identified in Carlo Barbera, the man,  the ability to set it on a new path

He then offered Carlo 50% of ownership shares and full control of the mill.

The rest is history.

Carlo Barbera not only succeeded in founding the “Carlo Barbera & C” Wool Mill but has also been recognized for years as the unmatched leader in the production of high-quality fabrics.

He immediately and exclusively decided to focus on quality.

He started with choosing only the best noble fibres and importing them directly from Australia.

He built a special cell next to the river bed where his precious yarns could rest at a constant temperature and humidity after the carding, the combing, and the dyeing.

That place and that water had kindled in him a desire to do something wonderful.

As a technician, he knew how to do it and so began his climb to excellence.

The second secret of success was the continuous updating of production technologies, while the control procedures remained manual, following tradition.

The extreme care for every step of production and the constant updating and maintenance of the machinery was soon entrusted to his second son Giorgio, who, like his father, would dedicate his entire life to the wool mill, contributing to the now world-wide fame of the family’s fabrics.

The same must be said of the eldest son Luciano, who, in 1970, added a line of clothing items, reserved for an uncommon clientele, to the group’s production. ONLY ONE IN A THOUSAND SHEEP produces the 15,5-micron wool fibres that give life to a Barbera suit.

Luciano saw the creation of a men’s clothing collection as the natural evolution of his father’s work.

“I like to dress down my suit and dress up my sportswear”.

This statement is his philosophy in a nutshell, and it translates into maximum attention to the comfort and pleasure of wearing a garment, as well as obvious cultivation of elegance. A life philosophy of “living it fully”, that fostered a more flexible approach to dressing: one where it’s not the rules that condition people, but people who can break the rules and create new ones.

This has been Luciano Barbera’s credo for years, but it also represents the clothing trends of today.

It’s absolutely not meant as an invitation to only dress “casual” 365 days a year, but to simply enjoy comfortable clothing and, through the attention to quality and details, bring to light the elegance and sensibility inside all of us.

It is this originality, this anticipation of trends, and this marriage of curated simplicity and elegance that made Luciano Barbera such a big success.

The collections are immune to the erosion of time, passed down from father to son.

Like the values and traditions that inspired them while aiming for the future.

“The most elegant man in the world,” is how the American press has defined Luciano Barbera, and rightfully so. He has always had the unique ability to bring together–in harmony–individual elements. Luciano Barbera, the luxury Entirely Made in Italy brand, was founded in 1970, but its foundation was laid years before. It began in 1962 with what is now an iconic image, shot by photographer Ugo Mulas for L’Uomo Vogue, of Luciano in a Saxony windowpane suit. In the late 1960s, esteemed retailer Murray Pearlstein of Louis, Boston came to Biella, Italy to seek the well-dressed man he had seen. So inspired was Pearlstein of the casual ease and style conveyed in the image that he convinced Luciano he must create a collection. “Mr. Pearlstein, I have no collection. I have only my own suits,” was Luciano’s reply. To which Pearlstein responded, ‘You have talent. You should design your own collection.
In 1970, the first Luciano Barbera collection was born, and soon after became known for its quality fabrics, iconic color combinations and thoughtful construction. At a time when most brands in Italy only produced single categories of items, Luciano created something entirely new –a full lifestyle collection.

Luciano Barbera created the Biella Master in Noble Fibres in order to spread the culture and the tradition of the Italian textile-clothing sector.
The brand embarked on expansion into Asia, growing the offering to a new global market.

Strong expansion into the US market – a presence building time for Luciano Barbera the man, and the brand. Slowly becoming an iconic figure in men’s clothing with spreads in Vogue, and major press outlets on a global scale.

Luciano Barbera continues to support the Biella Master in Noble Fibres created in the 1980’s. His commitment to spreading the culture and the tradition of the Italian textile-clothing sector remains strong.

​Reinforcing the commitment to made in Italy, while others moved manufacturing abroad, Luciano Barbera brand’s specialization in the textile art was strong, creating small productions which are exclusive and custom. The expectation of evolution is done quickly and discretely with new and modern materials coupled with our standards. Maintaining that we will always adhere to our manufacturing philosophy, hence granting that whatever we offer, is entirely made in Italy.

During these years, the brand opened into additional markets including the Middle East.

​Luciano Barbera is a leading ultra-luxury apparel brand and world-renowned arbiter of classic Italian style. The brand offers a wide assortment of sportswear, sartorial pieces, furnishings and accessories designed for the refined customer. Luciano Barbera is a cross-generational expression of wisdom, experience, modernity, and renewal. Products are sold only in the finest specialty stores and high-end department stores across the U.S., Russia, and Europe, and at exclusive Luciano Barbera flagship boutiques.

The brand remains a family business, as Luciano himself is not only the iconic founder and part-owner, his daughter Carola Barbera continues to operate as Creative Director and Managing Partner, and Luciano’s son Lodovico Barbera represents the company as Global Brand Ambassador.

This website uses cookies to improve your experience while you navigate through the website. Out of these cookies, the cookies that are categorized as necessary are stored on your browser as they are essential for the working of basic functionalities of the website. We also use third-party cookies that help us analyze and understand how you use this website. These cookies will be stored in your browser only with your consent. You also have the option to opt-out of these cookies. But opting out of some of these cookies may have an effect on your browsing experience.
Necessary Always Enabled
Necessary cookies are absolutely essential for the website to function properly. This category only includes cookies that ensures basic functionalities and security features of the website. These cookies do not store any personal information.
Non-necessary
Any cookies that may not be particularly necessary for the website to function and is used specifically to collect user personal data via analytics, ads, other embedded contents are termed as non-necessary cookies. It is mandatory to procure user consent prior to running these cookies on your website.
SAVE & ACCEPT